If you have questions about our methods or about sheet metal work, we will be happy to answer your inquiries.

The crown of a building is what completes and adorns the top of its façade; often imparting great style and character to the edifice. In the older, historic neighbourhoods of Montréal, three main types of crowns can be found: cornices, false mansards and parapets. Proper maintenance helps to preserve the character of these buildings and neighbourhoods, and increase property values.

A cornice is a continuous horizontal moulding that runs the width of a building’s façade. It crowns the wall, but can also divide the façade. The cornice represents the oldest type of crown found in Montréal.

Supported at both ends by protruding parts called corbels, cornices are often adorned with more or less intricately carved wooden consoles, interspersed with appliqués or molded rectangular forms. Between 1850 and 1895, cornices were made of wood. Then, in the early twentieth century, patterned-metal cornices became popular.

For repairs, it is rarely necessary to replace the entire cornice. If certain components must be replaced, it is preferable to try to replicate original details and materials.

Even if the masonry of the façade must be replaced entirely, the cornice can still remain in place because it is not supported by masonry.

Cornices must be constructed and installed to evacuate rainwater effectively. This prevents water infiltration which can damage the cornice as well as the wall. It is also important to ensure that the paint coating remains in good condition for long-term protection of the cornice. 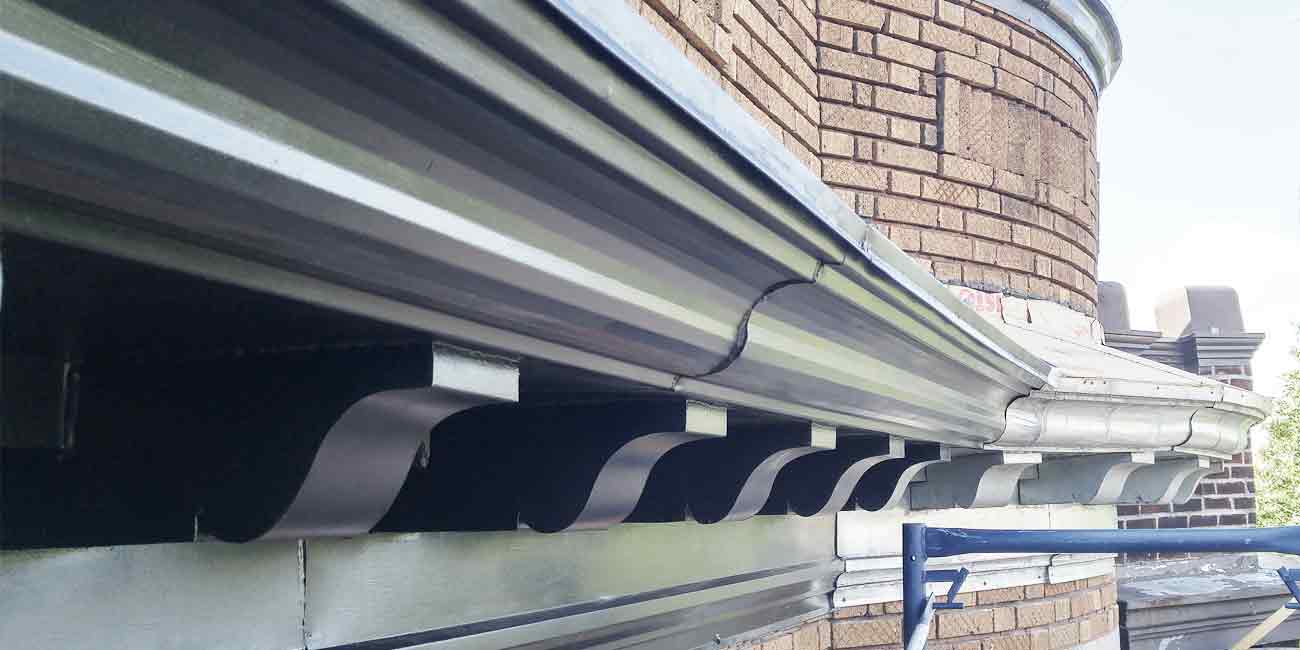 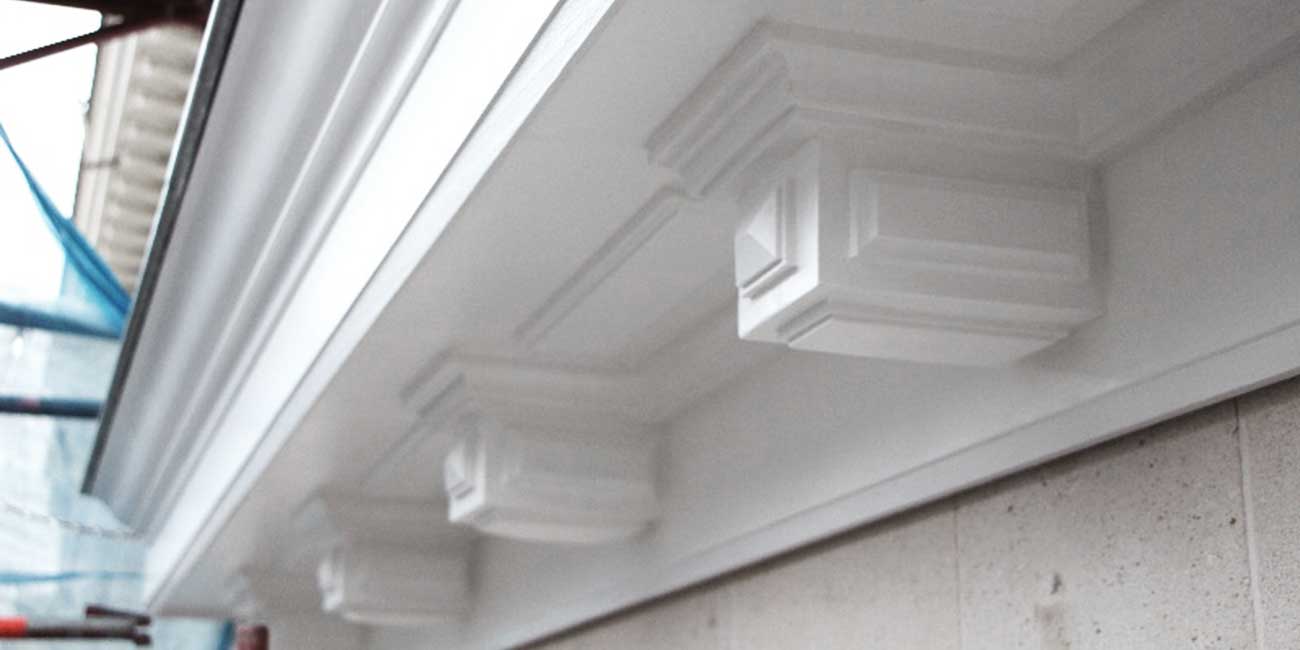 A false mansard is an overhanging crown, formed by an inclined plane of two to three meters in height, that gives the appearance of a mansard roof. False mansards in Montréal, popular between 1885 and 1935, were particularly decorative and could be found in a variety of forms. False mansards can include wood cornices, dormer windows, pavilion roofs, and/or turrets. They can also include certain decorative elements, such as iron ridges, weather vanes and finials. Plus, they often feature unusual slate roofing layouts and patterns.

All these elements play an important role in the overall expression of the building’s façade, and should never be overlooked during renovations.

Barring any major design flaws, it will usually suffice to replace either the flashing, one or more elements of the cornice, or the coating.

For the cornice to look its best, it must be painted, and missing or broken parts must be replaced.

Slate is available in a variety of colours and shapes (fish scales). Given its durability, it is often possible to repair slate without needing to replace the entire roof. It would be inappropriate to replace or cover slate with aluminium sheeting or asphalt shingles. 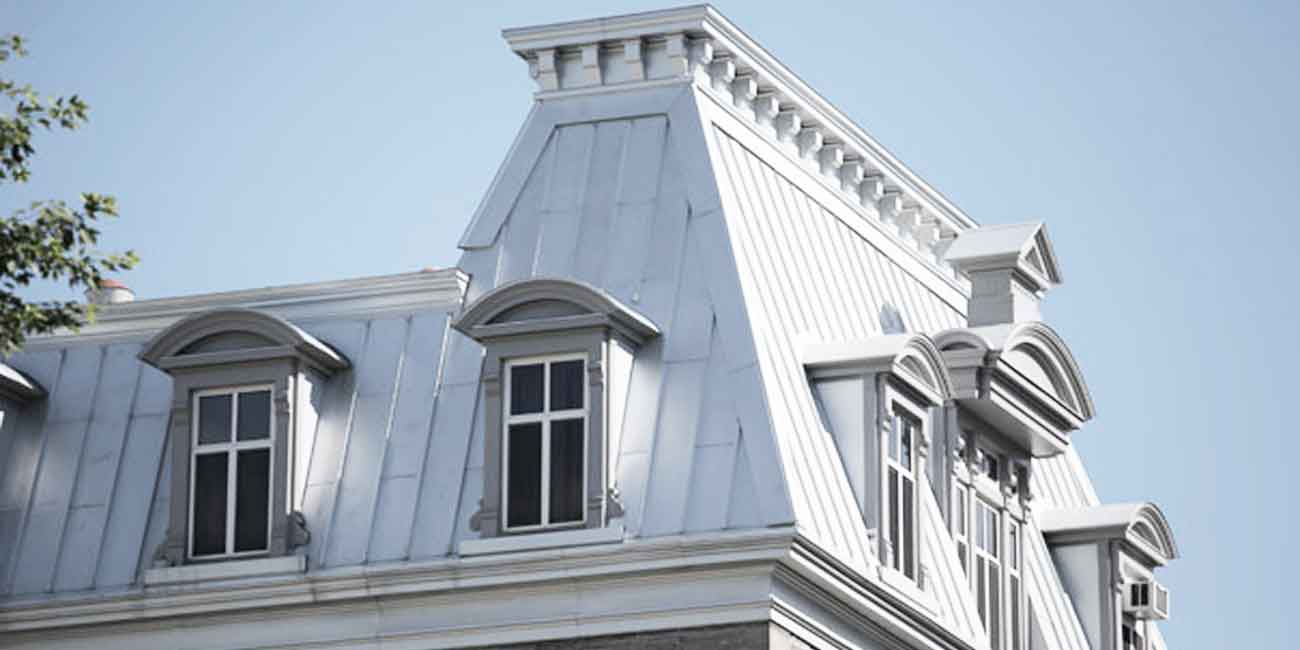 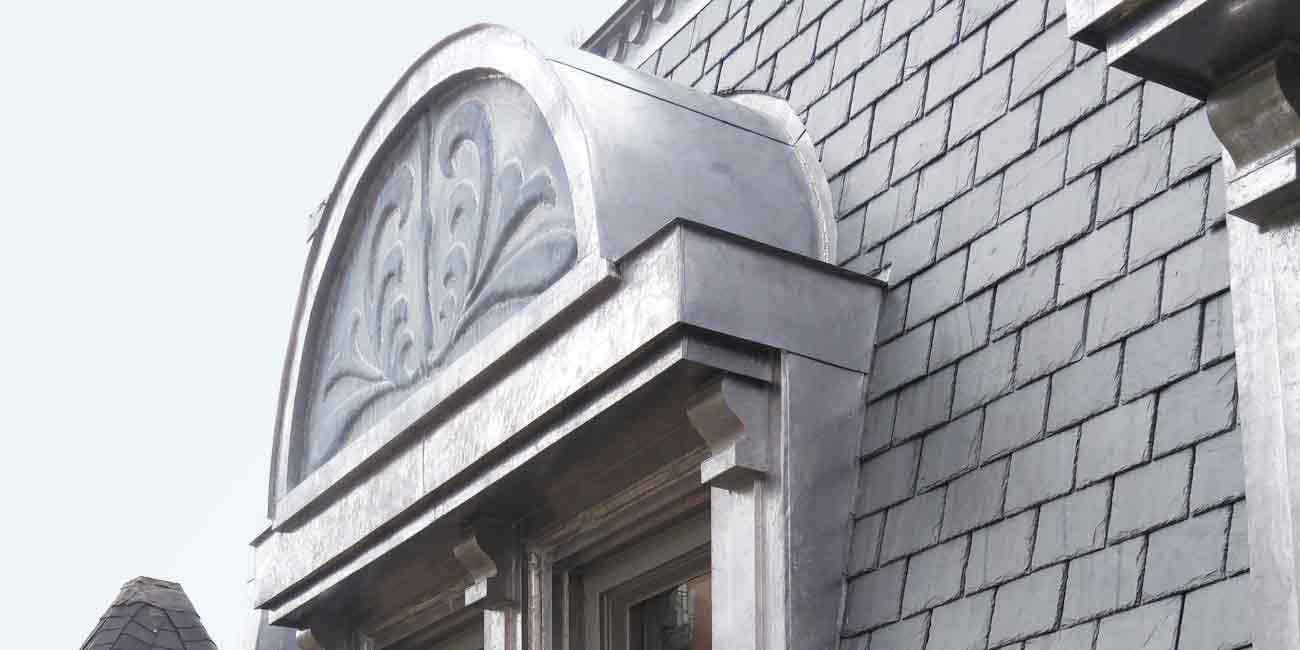 A parapet is a part of the masonry façade that extends above the roofline of a flat roof. Parapets were the most common type of crown used in Montréal between 1900 and 1935.

The parapet’s upper profile is not straight, but cut in a geometric pattern set by the layout of the stones or bricks which can sometimes be glazed. The parapet is often higher in the centre and at both ends, where pilasters are formed as part of the masonry. A decorative, galvanized sheet-metal cap covers the parapet, which often features unusual ornamental motifs, like amphorae, spheres and cones. There are many different styles of parapets.

During repairs, tightness of the parapet and roof must be ensured, and the flashing changed, if necessary.

The sheet metal flashing on top of the roof is usually comprised of a moulded band that adds character to the whole. Nowadays, however, it has become expensive to form the moulded sheet. Therefore, we restrict details to a minimum and focus instead on alternatives that respect the parapet’s composition, the brick effect in the pilasters, and the variations in height.

All too often during renovation work, the parapet either disappears or the brick veneer is rebuilt without any colour or geometric play. The result is a loss of elegance, character, and harmony with other neighbouring buildings. 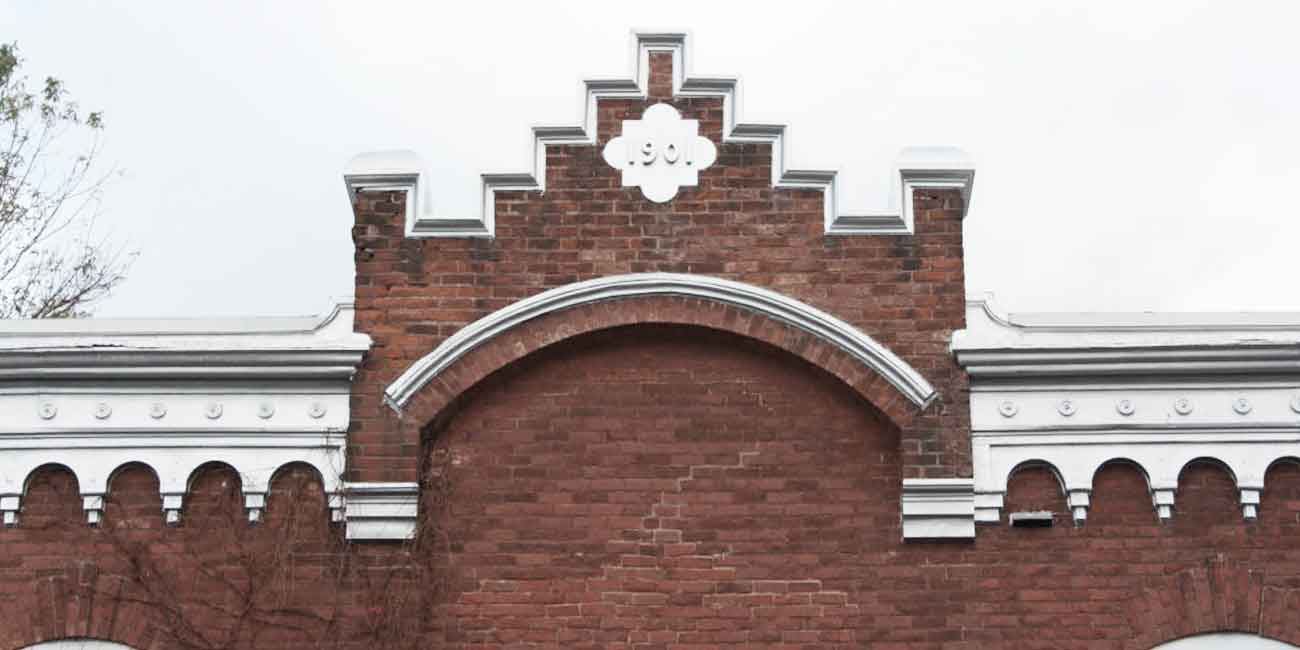 Ornaments can be found on cornices, mansards, the top of parapets and along old rooflines.

Restoring such architectural elements is an operation that requires much attention and critical judgment in order to determine the proper course of action in each case. As it aims to revive the figurative unity of a heritage building, the restoration plan should take into account the aesthetic and historic value of each architectural element.

This approach avoids mistakes related to aesthetics or to any historical falsification. Depending on the building’s particular architectural characteristics and on the condition of the remaining elements, there are three possible courses of action: an identical reconstitution, a re-composition by analogy, or a modern reintegration in a contemporary way.

Metal ornaments are quickly disappearing from the Montréal landscape. Proper maintenance is essential to ensure their conservation. They require regular stripping and painting to protect against corrosion.

When parts are broken, or missing, a piece in good condition can be used as a model for reproduction in the workshop. It is also acceptable to repaint them in colours other than black, as colours like dark red, bottle green, brown and blue were consistently used in the late nineteenth century. 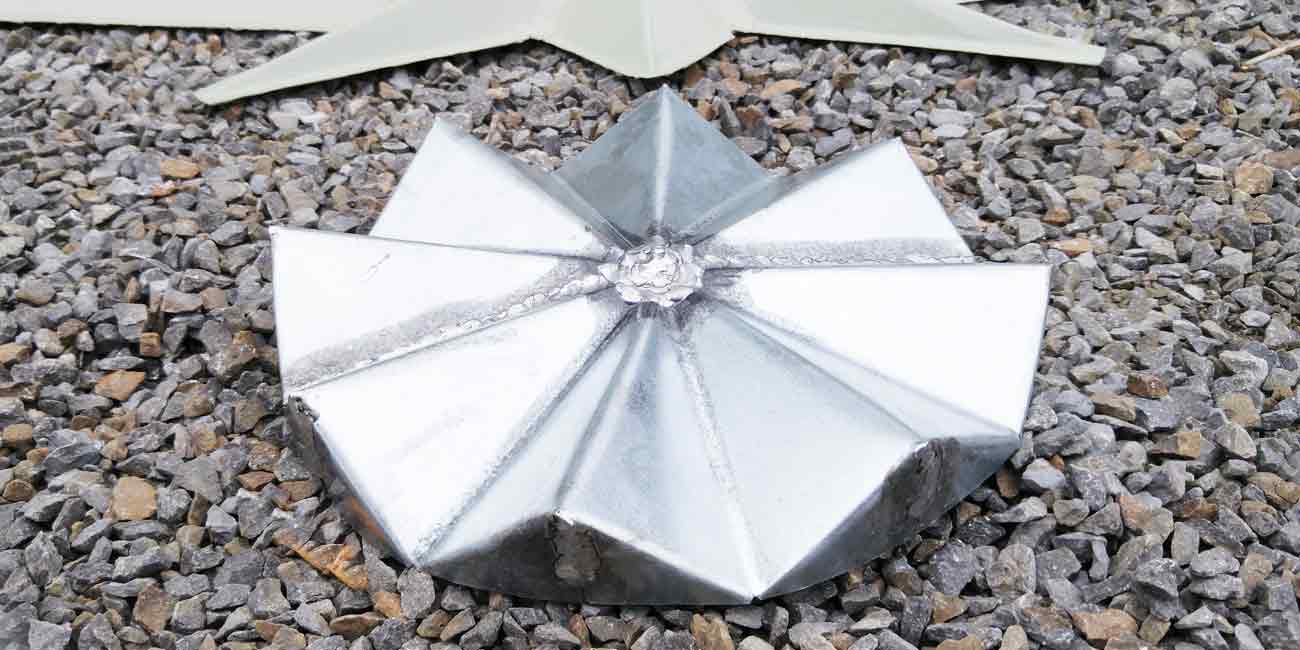 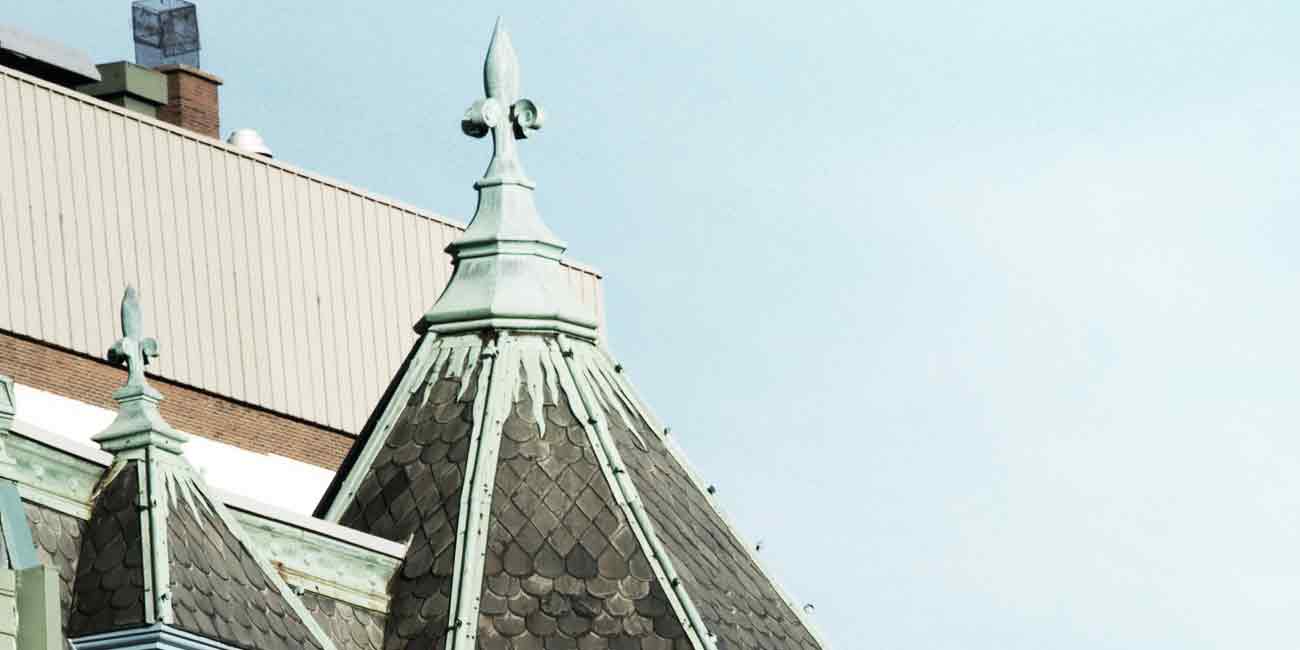 As crowns are constantly exposed to the elements, they are often, unfortunately, in poor condition. Regular maintenance ensures a long life and avoids major renovations. Moreover, proper maintenance helps preserve original features that may be difficult to replicate, such as wrought iron, glazed brick and iron peaks.

Before proceeding with major façade renovations, it would be wise to evaluate whether a repair is possible, instead of a complete reconstruction.

Crowns add a unique colour and originality to the streets of Montréal. We would do well to preserve them, so that we may also maintain our city’s unique charm and character.

When undertaking renovation work, be demanding, aim for the best, and take the time to do things well. These important architectural elements, which adorn our streets and enhance our lives, should receive the attention they deserve. 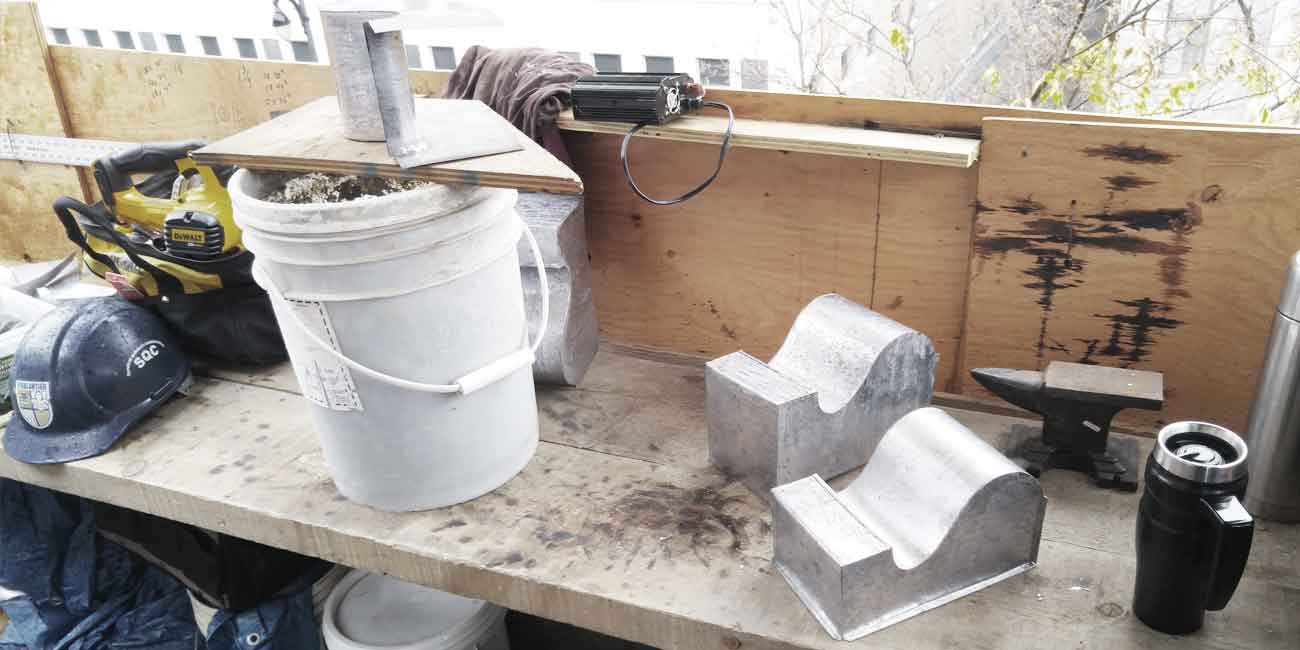 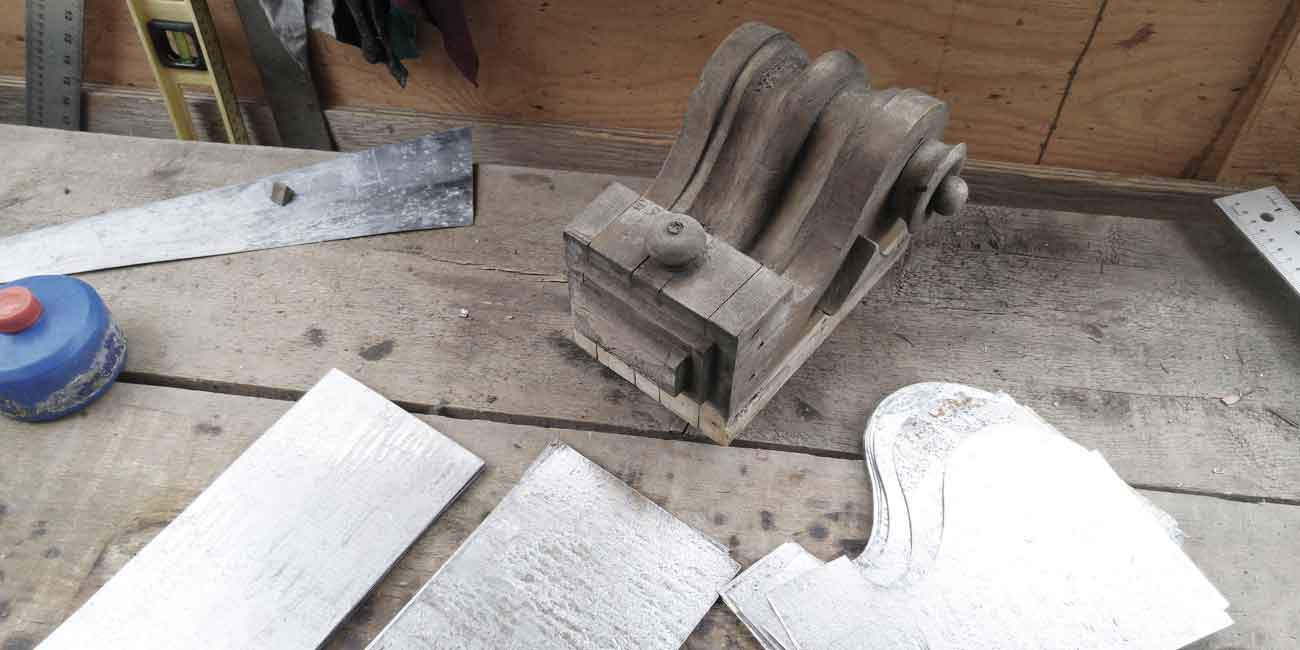